Association between variables measured in the ambulance and in-hospital mortality among adult patients with and without infection: a prospective cohort study 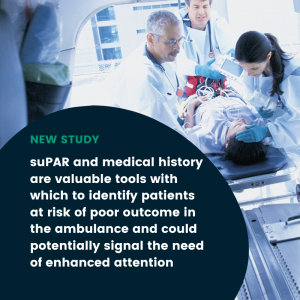 Conclusions: suPAR ≥ 8.0 ng/mL was associated with mortality in patients presenting to the ambulance both with and without infection and in those who developed sepsis. Furthermore, the inability of the ambulance patient with an infection to answer questions relating to specific symptoms was associated with a surprisingly high mortality. These results suggest that suPAR and medical history are valuable tools with which to identify patients at risk of poor outcome in the ambulance and could potentially signal the need of enhanced attention.

Background: Patients presenting with infection to the ambulance are common, but risk factors for poor outcome are not known. The primary aim of the current study was to study the association between variables measured in the ambulance and mortality among adult patients with and without infection. The secondary aim was to study the association between these variables and mortality in a subgroup of patients who developed sepsis within 36 h.