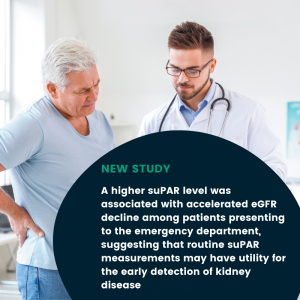 A higher suPAR level was associated with accelerated eGFR decline among patients presenting to the emergency department, suggesting that routine suPAR measurements may have utility for the early detection of kidney disease.

Hospitalized patients are at an increased risk of developing kidney disease after discharge, often despite the absence of any clinical indicators during hospitalization. Soluble urokinase plasminogen activator receptor (suPAR) is a marker of systemic chronic inflammation that can be measured from routine blood samples. We determined whether elevated suPAR during hospitalization is associated with a decline in estimated glomerular filtration rate (eGFR) after discharge.

This was a retrospective longitudinal cohort study of patients without detectable kidney disease presenting to the emergency department on two separate occasions during a 3-year period. The association between suPAR and a decline in eGFR was assessed by linear mixed models for repeated measures adjusting for age, sex, C-reactive protein, sodium, diabetes, hypertension and cardiovascular disease.