suPAR in the Emergency Department: A Tool for the Assessment of Elderly Patients 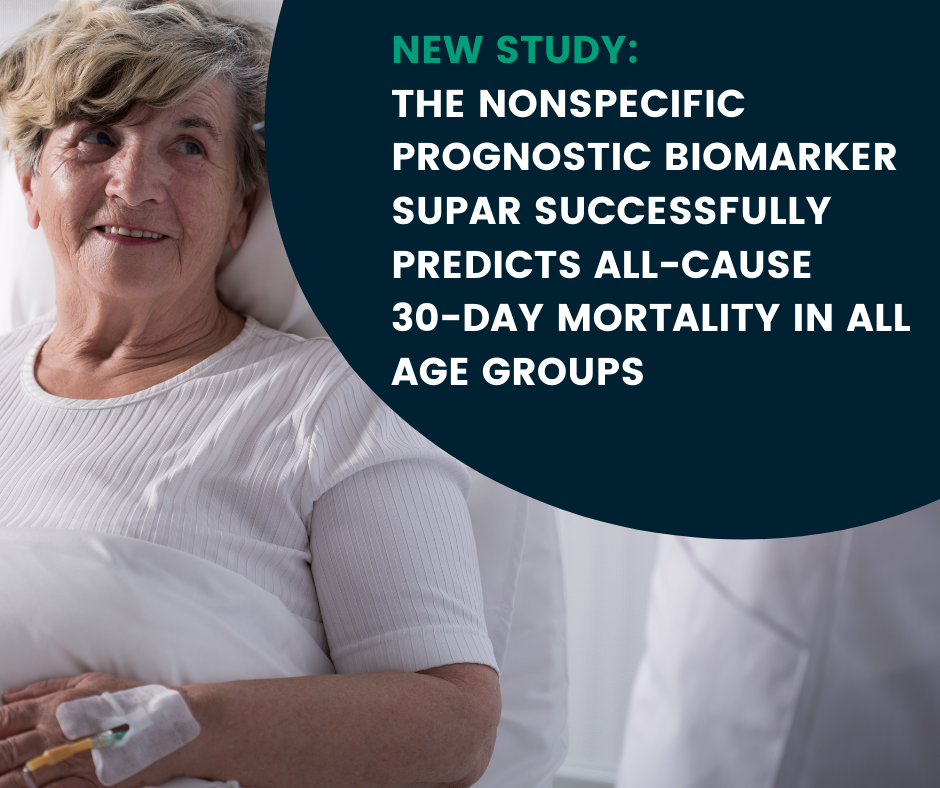 The study results suggest that suPAR levels were clearly elevated in the ED patients, the elderly patients displaying the highest levels. However, age and suPAR were not associated with 30-day mortality. High suPAR concentrations were associated with higher mortality and lesser probability to be discharged from the ED. Furthermore, as a nonspecific prognostic biomarker utilized in the ED, suPAR successfully predicts all-cause 30-day mortality in all age groups. SuPAR maintains its predictive value when it is used with other commonly used risk assessment tools. Low suPAR values can work as a support in discharging patients from the ED without increasing the risk of negative outcomes.

For all the patients arriving at the ED, the safest cut-off value for suPAR would be 4 ng/mL. On the other hand, a cut-off value of 5 ng/mL should be considered as a potential alternative in the elderly population. The cut-off value of 6 ng/mL should not be utilized. Our study confirmed that suPAR could successfully act as an addition to the risk assessment of elderly patients and the patients of which the current risk stratification methods fail to identify, especially as these patients are one of the most time- and resource-consuming patients of the ED.

The emergency departments are overcrowding and the current methods for the risk stratification are insufficient, especially in the elderly patient population. Thus, new methods for the assessment of these patients are needed.

This study aimed to evaluate suPAR, a nonspecific prognostic biomarker, as a tool of this kind in the ED patient population. Additionally, the study analysed, for the first time according to our knowledge, the prognostic role and risk-predicting value of suPAR in the elderly population. According to LRT, adding interaction between suPAR and age did not improve any of the models significantly.

As a previous study working with the same research data has concluded [27], this study confirms that suPAR has prognostic value in predicting both negative and positive outcomes: patients with increased suPAR levels are more likely to die within 30 days of index admission, and patients with low suPAR levels are more likely to be discharged from the ED and survive within 30 days of index admission, regardless of age. Vice versa, the suPAR levels among patients who died within 30 days were significantly higher than the levels of the discharged patients. Additionally, our regression analysis indicates that suPAR acts as a predictor for 30-day mortality both independently and when adjusted with age, NEWS scoring, CRP and comorbidities such as diabetes mellitus, cardiovascular diseases and neurological diseases. When suPAR is simultaneously adjusted with three factors, the predictive value weakens (OR 1.09 (1.01–1.17).

However, despite the higher median suPAR levels, the study data suggests that the utilization of 6 ng/mL cut-off value would lead to excessive mortality rates in the elderly population (2.5%) and would thus impair the safety-related properties of low suPAR levels. (Table 2). The incidence of 30-day mortality was highest in the suPAR 0–6 ng/mL group when compared to the 0–4 ng/mL group and the 0–5 ng/mL group. Between the groups, an increase of this kind was additionally seen in both the number of discharges (8.0% increase from 0–4 ng/mL group to 0–5 ng/mL group, 5.1% increase from 0–5 ng/mL group to 0–6 ng/mL group) and the amount of 30-day readmissions (4.3% increase, 3.2% increase). The median length of stay in the ED or in the hospital did not significantly differ between the groups.

For that reason, a cut-off value of 4 ng/mL would successfully work as a predictor for both positive and negative outcomes in all patients, regardless of age. On the other hand, in the elderly, an elevation of the cut-off value from 4 ng/mL to 5 ng/mL resulted in a significant increase in the proportion of discharges (10.3% vs. 18.3%) but only one death within 30 days of index admission.

suPAR is a nonspecific biomarker, and elevated suPAR values can be caused by chronic non-acute as well as acute diseases. The aim of this study was to determine if suPAR can predict negative outcomes in an unselected patient population with various chronic illnesses, especially in the elderly. According to the study results, suPAR predicts mortality in this group, regardless of age. However, due to its unspecificity, suPAR is not a diagnostic tool. For that reason, suPAR should be used more as a directional prognostic tool alongside other clinical features and assessment methods such as clinical examination, scoring systems and other laboratory markers. Judging by previous study and the data presented in this manuscript, suPAR could thus be used in the decision to either admit or discharge the ED patient.

Read the full article
Get the one-pager