On the basis of more than 600 published articles on suPAR in PubMed, a suPAR Monograph has been written.
Here you can find a short summary of the research done on suPAR within 12 groups of disease areas and see how the suPAR level is affected within each kind of disease.
The summary of each disease area is also found under Clinical Use. 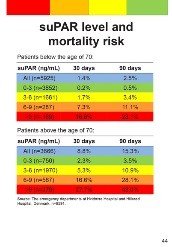 See all publications in PubMed

See all publications about suPAR in PubMed

Find your specific area of expertise and see all publications about suPAR in PubMed that are  relevant to you.

Examples of major studies about suPAR

“Association Between Elevated suPAR, a New Biomarker of Inflammation, and Accelerated Aging”, published in the Journals of Gerontology in July 2020.

The study shows that high suPAR levels were associated with an accelerated pace of biological aging across various organ systems, older facial appearance, and signs of older brain age. Participants with higher suPAR levels also showed decline in physical and cognitive function from childhood to adulthood compared to those with lower suPAR. Improvements of health habits between ages 38 and 45 were associated with less steep increases of suPAR levels over those years.

These findings support the utility of suPAR in studying the role of chronic inflammation in aging and functional decline.

The National Early Warning Score (NEWS) and suPAR were both connected to risk of in-hospital-, 30-day and 90-day mortality in acute medical patients. The suPAR level increased with increasing NEWS, and high suPAR independently predicted risk of mortality across different NEWS scores.

This means that suPAR adds prognostic value to NEWS, particularly in patients without clinical signs of deterioration. Patients with low NEWS but high suPAR levels had a life expectancy that can be compared to those with high NEWS scores.

The addition of suPAR to NEWS thus significantly improves risk prediction of both low- and high-risk acute medical patients.

The results of this observational study show that elevated suPAR levels were associated with increased risk of developing cancer, CVS, T2D and with a shorter life expectancy. suPAR was more strongly associated with cancer, CVD and mortality in men than in women, as well as in younger rather than in older individuals. These associations were robust even after adjustment for other known risk factors for these diseases.

The authors conclude that the use of this early warning inflammatory biomarker in standard screening procedures could improve the prediction of mortality and these major diseases.

The suPARnostic® brand consists of the following 3 products:

If you have any questions regarding our products or business, write to us here

By signing up for our newsletter you will receive the latest news about our products.

You can find out more about which cookies we are using or switch them off in settings.