Healthy male, age 50, experienced over several months weight loss, reported non-well-being and did repeated standard blood tests at his doctor and at a hospital. All standard blood parameters were normal, his suPAR value was rising though and hits the critical level after approx. 6 months.
Although still labelled “healthy” by the medical system, he shortly after broke down and was admitted to ICU, and liver failure was imminent soon after. The patient did not survive and was post-mortem diagnosed with Q-fever, a tropical disease.
Recognition only one month earlier would most likely have saved his life. More elaborate and expensive tests on this patient would have revealed earlier, that he was suffering from a critical condition.

suPARnostic® would have flagged that patient correctly early enough to save his life. 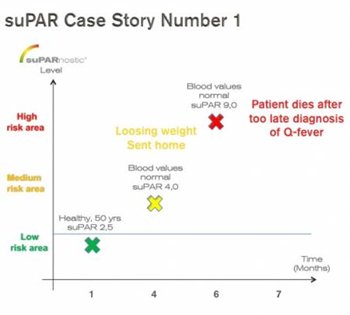 Healthy male, age 25 years, experienced a continuing “feeling sick” and symptoms like being pale and tired. Repeated doctors visits resulted in no diagnosis, all blood values were normal and no further tests were authorized.
The slowly rising suPAR value predicted that the person was developing a potential critical condition, and at suPAR value 4,1 the person was admitted to an Emergency Room at request of ViroGates. A series of more elaborate tests diagnosed the person with latent tuberculosis and mononucleosis.
As a result of the early recognition, the person did not require a single hospital day, no drug treatment and had to take almost no sick days. More sleep, no sports and no alcohol were sufficient for healing. Too late recognition would have involved sick days, medical treatment and eventually even hospitalization days. 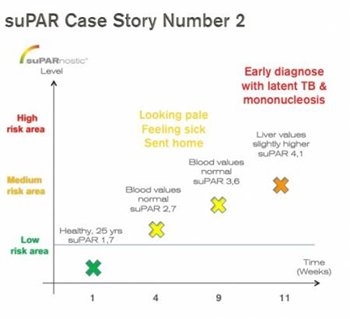 Healthy male, age 45, experienced the same symptoms as Case 2 above, including loss of some weight. Blood values were normal and the person’s suPAR level was slightly elevated, but was not rising into the critical area.
Adjustment of lifestyle (more sleep, better food, more sports) lowered the suPAR level a few months later into the “normal” level.

suPARnostic® recognized correctly that this person was not a critical case requiring immediate hospital attention. 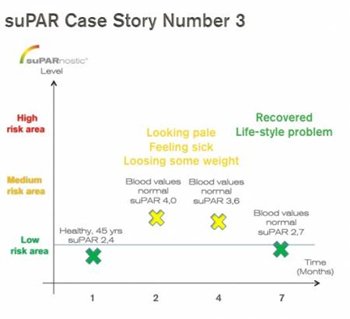 Find the cost savings potential for your hospital here:

Want to be contacted by a specialist?

We will get back to you within 24 hours on weekdays.