The suPAR biomarker predicts critical illness across diseases, by measuring the level of activation in the immune response.

suPARnostic® is a reliable prognostic tool that enables healthcare professionals to make quick and informed patient triaging decisions at emergency departments in hospitals.

How to interpret suPAR results

“suPAR is relevant to implement in emergency departments since it correlates better to all-cause mortality than the vital-sign based scoring systems.”

The national early warning score (NEWS) and similar vital sign-based track-and-trigger systems are commonly used in hospital wards to monitor patients’ clinical progress and as a risk assessment of acutely ill patients in the triaging process at the emergency department1, 2.

The use of track-and-trigger systems reduces unexpected in-hospital mortality.3 However, these scores based on clinical signs have limitations in predicting the course of disease, including the case fatality rate.4

In an editorial, Koch & Tacke put forward their theory on how the amount of suPAR in the blood can be utilised as a prognostic, data-based tool to prioritise emergency patients.5

Uusitalo-Seppälä and co-workers conducted a large single-centre prospective study including 539 consecutive patients with suspected infection, in which suPAR was measured at admission to the emergency department.6

The study showed that suPAR levels were strong predictors of 28-day, 90-day, and even 1-year case fatality. It allowed for a better risk stratification than classical inflammatory markers such as procalcitonin and interleukin-6 or C-reactive protein (Fig. 1b).7

The observation was later confirmed in another study of acute medical patients. The study found that suPAR is strongly associated with disease severity, readmission, and mortality after adjusting for all other risk factors. Hence, suPAR adds information to already established prognostic indicators. While patients with low suPAR levels have a low risk of readmission and mortality, patients with high suPAR levels have a high risk of adverse events. 8 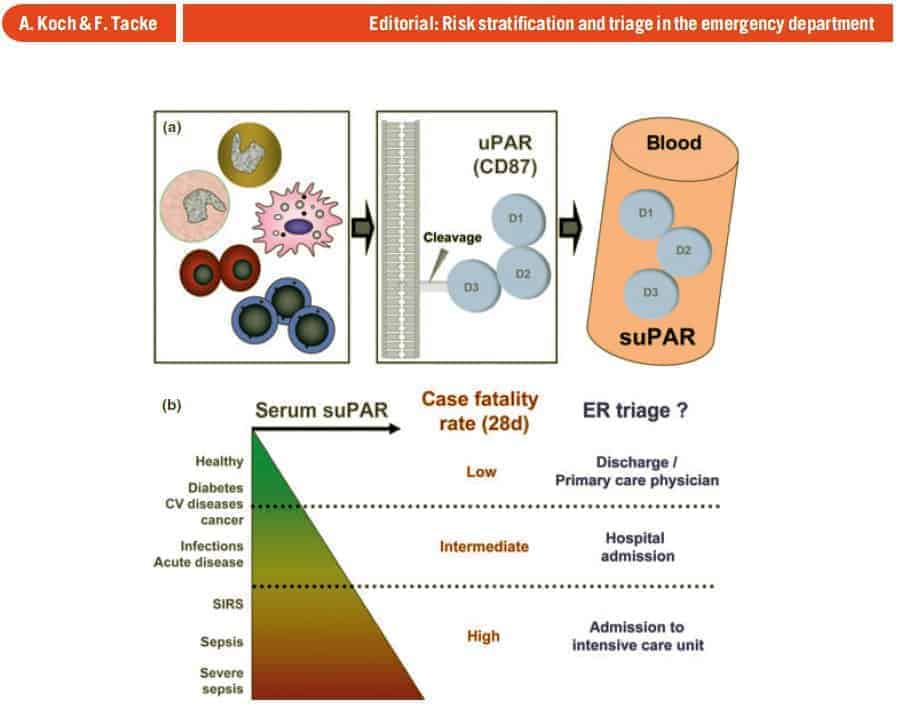